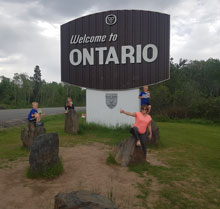 As we head through Ontario it isn’t long before we started to see the enormous rocks that they had to cut and blast through to put the highway in.

I still think and wonder about those who came before us and what that journey must have been like for them—the arduous task of travelling through the dense bush or across the many lakes and water bodies here in Ontario. I often wonder, while it seems rather obvious why so many of these towns and cities have been built on the water, if that was just due to happenstance or if there were a group of travellers who had gotten lost and decided that this was a good a place as any to set up camp?

Some of the history that we have discovered on our journey so far has been interesting. Turns out that there was a gold rush in Northwestern Ontario at one point, prior to the gold rush in the Klondike (which as it turns out killed the gold rush here and sent every one North). Another interesting fact was that a small community called Wabigoon was also looked at and surveyed along with Winnipeg for the massive CN train loading and unloading, and switching yard that was required to handle the increasing demand for rail transportation across Canada and in to the United States. However the site was later built in Winnipeg. 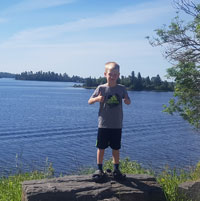 It seems that around each corner and over every hill there is a little lake or body of water, most of which have beautiful little cabins on their shore lines. Since we are not traveling very fast we definitely have the privilege of enjoying the view. The beauty and seeing the lakes in all the wonder from different angles is wonderful. I am starting to see now why Dad always talked about how beautiful it was here and why he seemed to miss it so much.

It was interesting pointing out to the kids the drill holes that they made so they could blast the rocks and put the highway through. Turns out I later found out that the lines and half of the drill holes that you can still see along the side of the highway are called shear lines and they are done that way on purpose, so that the rock face is left as a flat surface. So, in the event that a vehicle hits the ditch they ‘should’ drift along the smooth surface rather than coming to an abrupt halt on a jagged rocky edge. 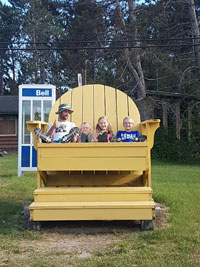 We need a chair like this to read stories at bedtime.

The biggest challenge so far with this whole trip has been tiny in the bigger picture of things, however when you have 6 people in confined space and only one-bathroom things get a little interesting. For the most part it works great. If there is an emergency me and the boys can go wiz outside. Not as much the case for the girls, and when more than one of us have to go #2 at the same time things can get a little ‘tense’. Otherwise the sleeping and living arrangements have been working really well and I may even have Kristie convinced by the end of this trip to live in a motorhome for 6 months of the year (I was trying for permanently but she said that was a ‘Hard’ No!, but she’ll come around)

The weather has been just beautiful so far. The humidity is starting now that we are getting closer to the water. It’s interesting how much the clouds hold in the humidity—when it is over cast the heat and humidity are intense and I just drip, but when the sky is clear and the sun is out the heat from the sun is definitely warm but it seems to be a much dryer heat. I have noticed that at home in the winter especially when it is really cold out and a clear sky but when there is cloud cover at night it seems to hold in the heat.

Since we are now down to single lane highways for the majority of our stretch through Ontario things are getting challenging with the size of the motorhome, finding sufficient room to stay on the shoulder and out of the way for the traffic coming behind us. The nice thing is that the speed limit here is only 90 km/h so the speed of traffic is a little less, which also sends it in waves as there is limited opportunity to pass and trucks are going slower. We get waves of traffic go by from both directions.

With only a couple of close calls (which seem to happen in front of me, nothing like watching the vehicle that contains everyone in your family almost cause an accident that could wipe them all out!) The hills and corners here pose a challenge to see what is coming behind us when the motorhome decides to pull ahead or move, parking and stopping in strategic locations is key so that not only the traffic that is coming from both directions can see us and has time to react, so we can also move ahead and pull over again safely when there is no one coming up behind us. The small narrow, sometimes steep shoulders make it slightly challenging to follow along behind and over far enough to stay out of traffic. Then you have the road signs that are right beside the road that if not paid attention to can be hit with the side of the motorhome! Just another challenge that life throws our way and we find a way to deal with it! And deal with it we shall. 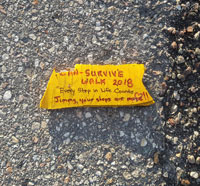 Another treasure from Susan.

My feet, legs and body have been holding up well thus far, keeping them dry seems to the be the major key. Changing out socks every so often has made a huge difference. I made the mistake a few weeks ago asking Mom and Kristie to walk for a few minutes when I was in resting and not feeling great. Now the challenge that I face is trying to keep them in the motorhome when I stop for a rest. Some of the Kilometers have been logged by Kristie and some by Mom (Mostly in her flip-flops). This has brought a little different light for me to the whole project. Cancer not only affects those who are diagnosed but the whole family, our family is taking steps towards eliminating Cancer. Come and take some steps along with me and my family to work towards the ending of this awful disease!

Get up, Get active!

2 thoughts on “Rolling Along In Ontario”